A Lot of Learning Starts
at 4 o’clock Every Afternoon

Warren Bennis, a pioneer in the contemporary field of leadership studies, described an invented life, as one “…without borrowed postures, second-hand ideas, or fitting in instead of standing out.”

An invented life is so unique that only one person or a single couple could self-imagine and self-direct it.

For me, two important elements of inventing my own life and character, in addition to my family consisting of most fortunately of fifty years of marriage to Sally, and blessed by our children and grandchildren, are experiencing a lifetime of learning and playing amateur sports in seven decades.

Creating a lifetime of learning takes a sense of optimism, curiosity, and elasticity for going far beyond the comfortable and familiar, sparked by personal adventure and courage, and the emotional intelligence for fulfilling one’s potential by forming extensive and productive new relationships. In contrast, those who never stray from grey cocoons attached to short tethers, often learn there is more risk in life from not being bold enough than by being too bold!

Likewise, the experiences and joy from playing endless games in youth, continuing through interscholastic and intercollegiate athletics in basketball, baseball, and football during my secondary and higher education in Massachusetts at Deerfield Academy and Williams College (even scoring in 13 consecutive college alumni basketball games after the age of 55), meet inveterate needs for competition, challenge, physical fitness, and new relationships. Jogging, walking, and swimming are now more prominent; taking up golf at this point would probably turn out like prohibition, “…simply a noble experiment!”

Amateur sports and athletics create significant life skills gained from “accidental education”, as described by Henry Adams, or pointed out metaphorically by the Duke of Wellington that the Battle of Waterloo was won on the playing fields of Eton. Becoming a good competitor is paramount, not necessarily winning all the time, simply out-working the situation, developing the grit for not giving up, and recovering from getting knocked down.

This month while watching sports, I was invited spontaneously by coaches to say a few words of encouragement to two youth athletic teams. As context, the black-and-white picture below shows our undefeated 1963 baseball team at Deerfield Academy accompanied by that season’s statistics. 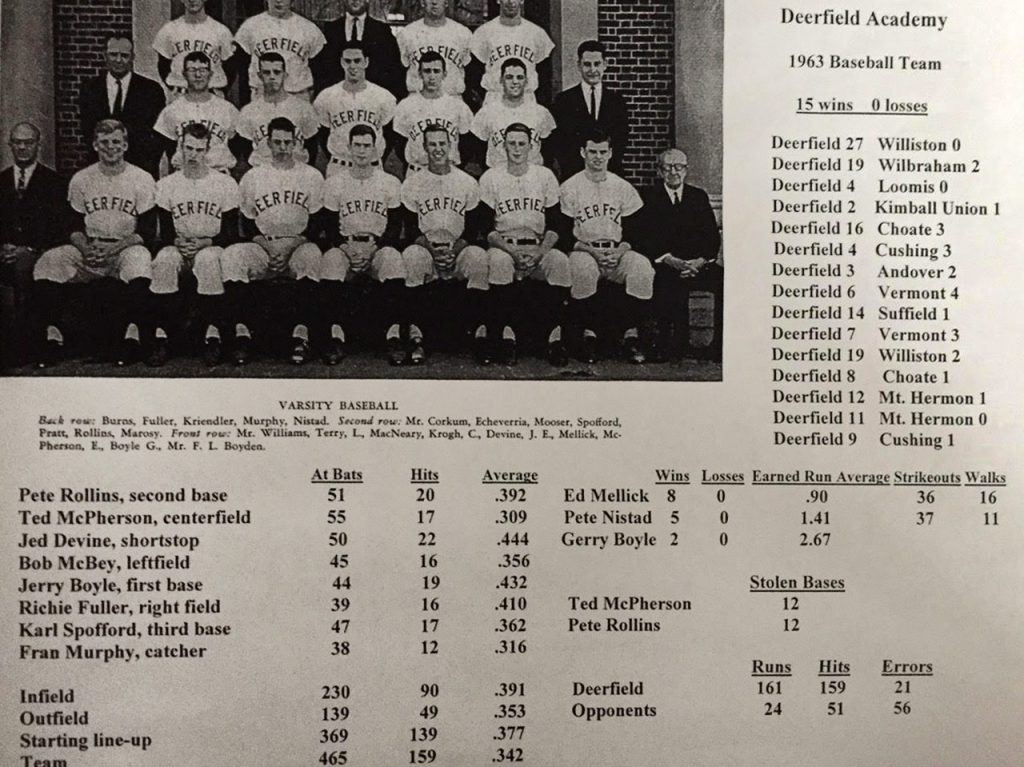 The color picture below shows me with the current outstanding Deerfield Academy baseball Coach Pat Moriarty after my brief remarks to this year’s 2019 team titled “Character” and “The Only Source of a Sustainable Competitive Advantage is People.” 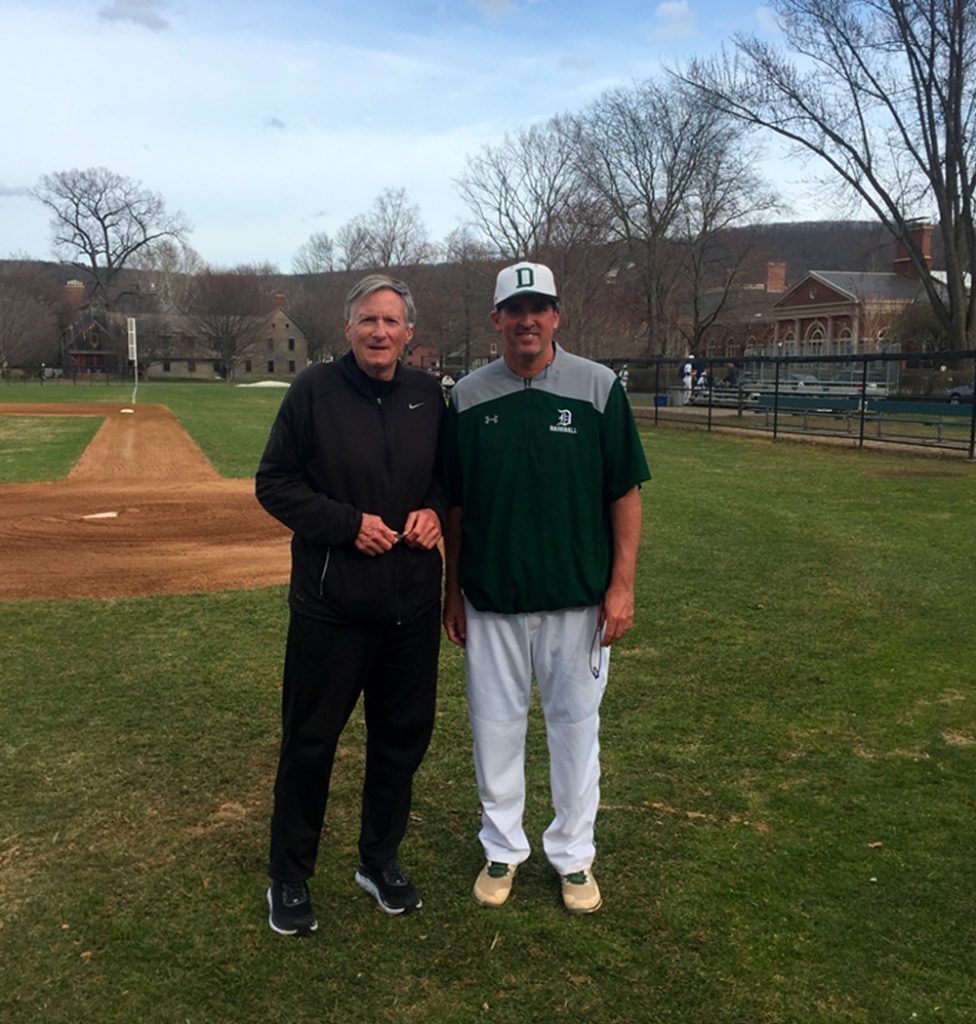 A few days later back in Dallas, I was honored to join my friend Earl Young offering my thoughts on the same topics for consideration by the Providence School track team. 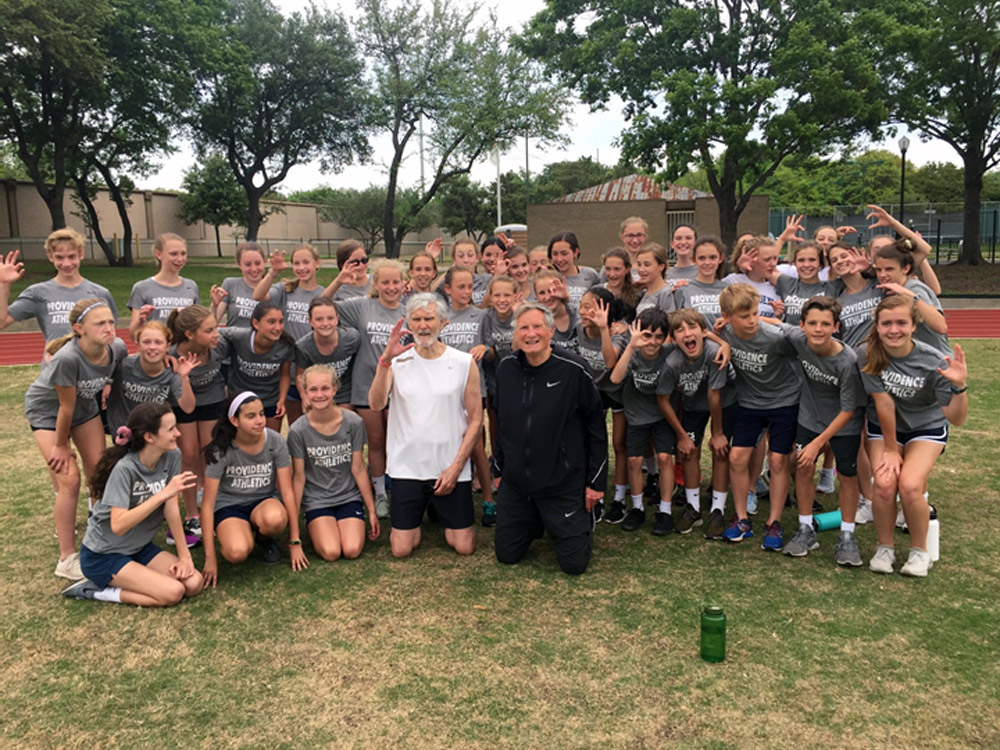 Earl Young won a Gold Medal in the 1960 Olympics in Rome, Italy, at age 19, as a member of the United States 4x400 relay team. As a survivor of blood cancer, Earl Young is directly responsible for saving 36 lives of others by raising awareness for the need for swabbing by potential bone marrow donors and inspiring students on college campuses and adults to do so. Learn more about Earl Young at http://earlyoungsteam.com/

So, in short, for those of us who are not old, just possessing “experience disproportionate to our age”, remember to give a lift of encouragement to young people since “a lot of education that starts at 4 o’clock each afternoon that lasts a lifetime!”